The brothers of Rho Colony decided to get together to hold a water pong tournament to truly determine who is the champion of water pong. Set up as a double elimination tournament, we had a total of 7 teams participate. It was a very competitive event with it all coming down to the wire. The last three teams remaining were Maulin and Ghanchi, Bhavik and Chan, and Sohan and Vineet. It was at this point in the tournament that things started heating up and becoming extra competitive. 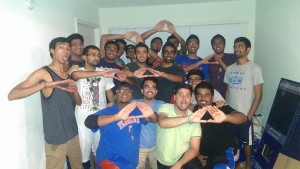 With a close match up, Maulin and Ghanchi’s team was eliminated, landing them in third place. Bhavik and Chan advanced to play Sohan and Vineet in the final game. Needing to defeat them twice, they were only able to win one game before they were eliminated and landed in second place. Sohan and Vineet were crowned the champions of water pong and the winners of the tournament.