On March 21st, 2014 the Rho Colony of Delta Epsilon Psi unveiled its newest members: the 4EVER FEARLESS Iota Class. Being the first spring line in three years as well as having the first ever spring New Member Presentation for Rho, this class already began to set its mark in this fraternity. Due to the hard work of their Pledge Master, Maulin Patel, and Pledge Captain, Mohammad Ali Ghanchi, 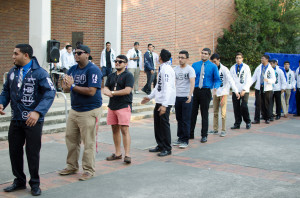 these men now embody our pillars of Brotherhood, Discipline, and Commitment. At the beginning of the show, many organizations such as Iota Phi Theta, Delta Phi Omega, and Kappa Phi Lambda strolled before a huge crowd before DEPsi showcased their national stroll alongside brothers from Theta and Lambda chapter. During the show itself, Iota Class greeted the organizations of the NPHC and MGC and made the crowd laugh with their hilarious skits for all the sororities on the council. Finally, the time everyone had been waiting for had finally arrived, the newest members were revealed. We present to you: the Iota Class of Rho Colony 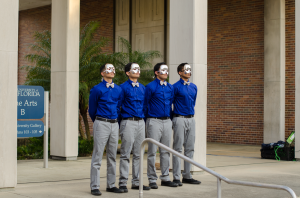 For everyone that came out, we hope you enjoyed the show and expect bigger and better shows every year as Rho colony expands!